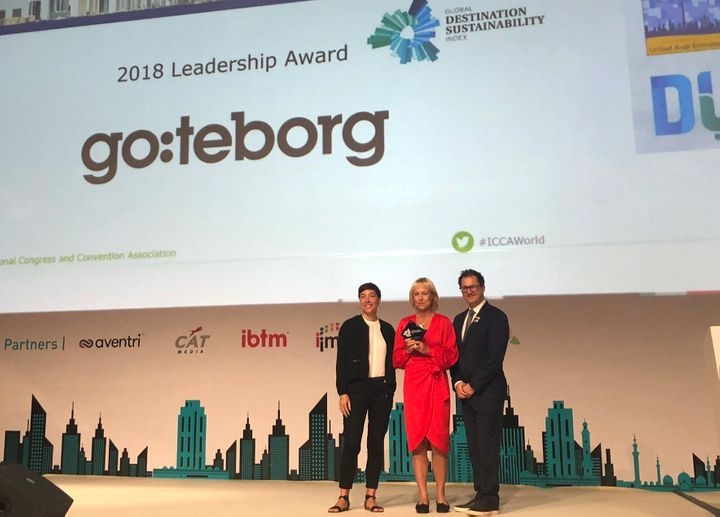 For the third year in a row, Gothenburg has come out on top when it comes to sustainability, according to Global Destination Sustainability Index 2018, which was revealed on Wednesday. This is a broad international ranking of sustainability work being done in 50 world cities.

“We are immensely proud of this award. The fact that Gothenburg succeeds in retaining the top ranking for the third year is an achievement that shows that the city and its tourism industry take sustainability efforts seriously and challenge other cities to do the same,” says Camilla Nyman, CEO of Göteborg & Co.

These rankings were first issued in 2016, and this year interest in taking part was greater than ever. 50 cities and destinations participated, and places like Washington, Bangkok, St Petersburg and Monaco were new additions.

With a score of 94 points of a possible total of 100, Gothenburg came out on top in the list of cities for meetings and events, according to the Global Destination Sustainability Index (GDSI). Gothenburg amassed 92 points last year and took first place then as well.

The GDSI was launched by MCI-Group together with the international organisation ICCA. On Wednesday November 14th, Annika Hallman, Director Gothenburg Convention Bureau, was able to accept the award on behalf of Gothenburg at the ICCA annual world congress in Dubai.

“Of course, our aim is to come out on top – but in the long run, it is more important for more cities to start working actively on sustainability issues and learn from one another. That was also why the GDSI was initially set up,” says Annika HallmanDirector Gothenburg Convention Bureau.

“I am thrilled to see the level of performance of the GDS-Index improve year on year (+6% in 2018), this is an extremely good sign that destinations are tackling the sustainability challenges of our industry and that the GDS-Index drives and delivers measurable results”, commented Mélanie Delaplanche, GDS-Index Project Director.

All elements of sustainability are measured: environmental, social and economic. But to gain a high ranking, it is not enough just to involve the hospitality trade, with facilities and hotels; the city as a whole must also be engaged in sustainability issues.

The cities are assessed based on about 30 criteria: such as how effectively the city recycles and disposes of waste, environmental certification of hotels and restaurants, emissions of greenhouse gases, accessibility, the traffic situation, rental bike systems and whether both public and private stakeholders have sustainability strategies in place.

“Gothenburg sets an outstanding example as regards sustainability, and a lot of people are looking at what we have done. We were invited this year to hold lectures and workshops in front of several other destinations. More and more cities are now realising that sustainability is a vital argument when it comes to persuading organisers of major conferences and events to consider what they have to offer,” says Annika Hallman.

To find out more about the survey and the results for all cities involved, please see: http://gds-index.com/